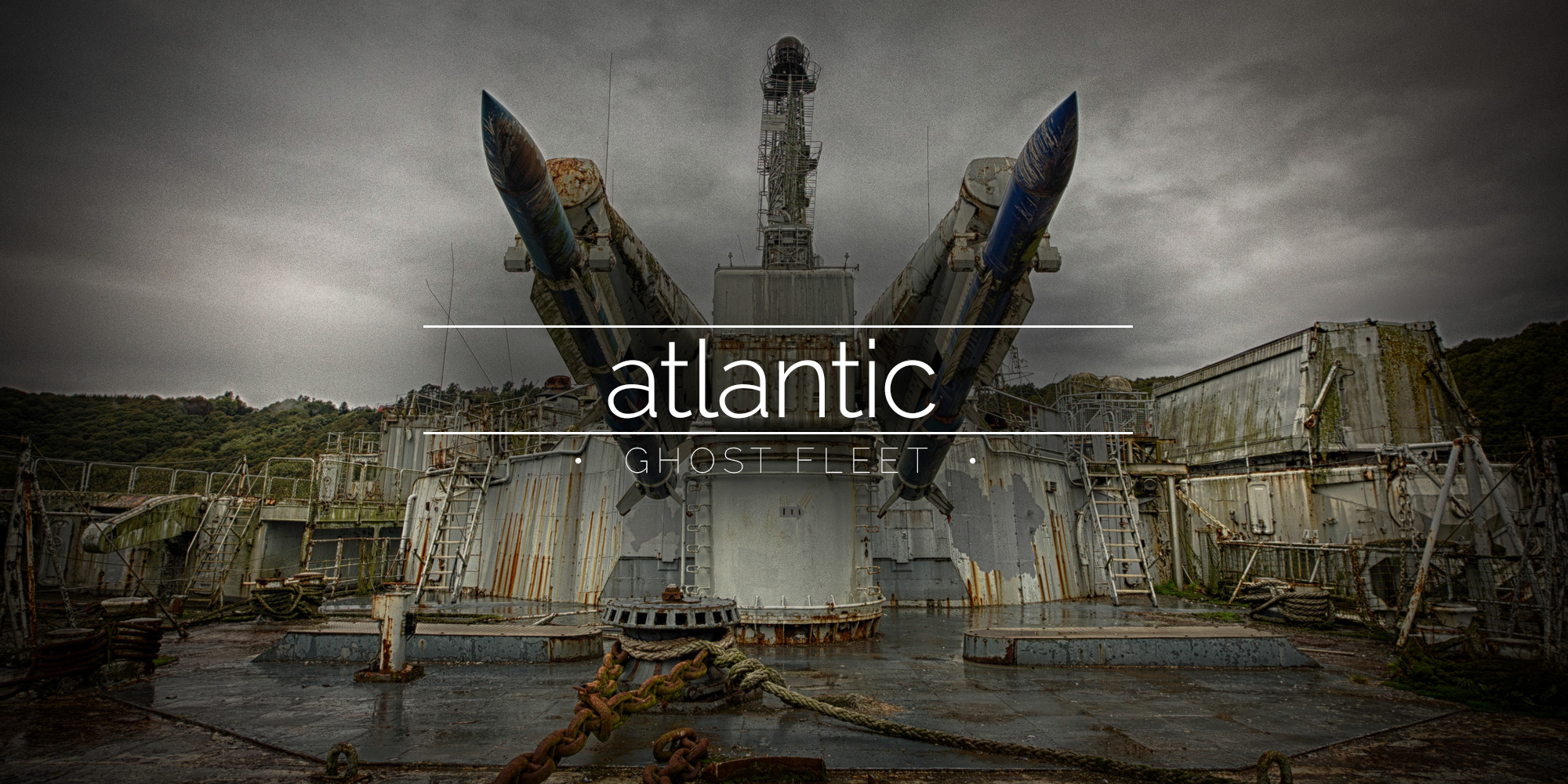 The mothballed Atlantic Fleet consists of a number of warships, moored in a bay. The fleet includes an anti-aircraft missile cruiser with weaponry in tact.

Somewhere along the coast of France, Proj3ct M4yh3m and I make our descent down the near sheer cliffs surrounding a large bay. Out of the darkness we catch a glimpse of the ghost ships – a fleet of warships silhouetted against the night sky. Overwhelmed with excitement and nerves we know we still have to get to the fleet, moored in three clusters around 100 metres from the shore. Focus! We have to keep our gear dry, avoid the regular Gendarmerie Maritime patrols and most importantly fight the strong currents. In the water, emotions run high as we approach the gigantic vessels, we are dwarfed by the imposing hulks looming above us.

Our target is the largest of the fleet – a huge anti-aircraft missile cruiser. The ship was the flagship of the French Navy for many years after it was built in the 1950s, and was in operation until the 1990s. The warship was built with 16 x 127mm Anti Aircraft guns and 20 x 57mm mod51 guns. The battleship was later upgraded to become a missile cruiser and was fitted with MM-38 Exocet systems, 4 x Masurca Missile system, various anti aircraft guns, and could carry one helicopter. The cruiser is now mothballed so spare parts can be salvaged when needed.

After boarding the ship we begin to look around. The vast array of radar systems tower above us, we pass by the huge anti aircraft guns and make our way inside. The very first thing we discover is one of the huge Masurca missiles, suspended in it’s launching system ready to be fired.

Continuing the explore we make our way deeper into the bowels of the ship. The silence of the night is broken by the incessant screeching and creaking noises of metal on metal as the rusting vessel rubs along the smaller ships moored at either side of it. As we make our way below the waterline the surface of the sea can clearly be heard sloshing against the sides and we realise we are now deep inside. A maze of doors and tight spaces, a quick glance around and we wonder which way we came from, we need to keep our wits about us otherwise we could be lost for a long time in there.

We’d been exploring the systems down below for a while, but realised there was something big we hadn’t seen yet…. The bridge! Heading up we make our way towards the front and soon discover the radio room. We must be close, so stop off to photograph the multitude of receivers and transmitters. Up further and woah!! we’re in the radar room. Just behind the bridge, for me this was probably the most impressive room, crammed full of screens and monitoring equipment, along with weapons tracking and firing systems.

As the night goes on we can feel the movement of the boat increase to alarming levels. Checking out of the windows we can see the rain is coming down heavily, so we venture outside to check on the weather. Just opening the door against the gale force winds that have picked up was a struggle! This isn’t good – there is no way we can get back to shore while this storm persists and the Chunnel train won’t wait for us!

As the sun rises and the rain pours we venture out onto the deck to grab some externals. The vast array of weaponry becomes apparent and we discover the huge Exocet missiles mounted on the stern. We grab a few shots and miraculously, right at the last moment before we have to leave, the storm clears just enough for us to head back to shore – bursting the dinghy as we hit the shore and missing the early morning patrol boat by minutes. One high-five later and we’ve finished the best explore we’ve ever been on!